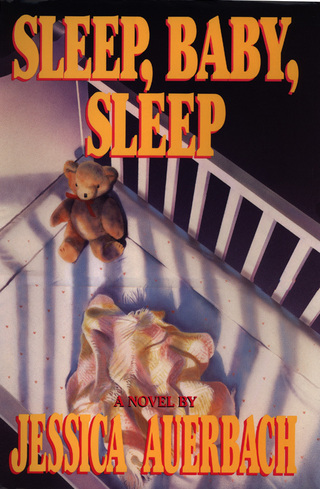 “Auerbach has once again demonstrated her gift for creating believable, sympathetic characters. This is Auerbach's best work yet, well written and engrossing.”

“Told with edgy intensity, [this] gripping story of a young mother searching for her kidnapped baby . . . maintains a steady momentum and suspense. A scenario that's horrifying yet plausible.
--Publishers Weekly

“Brilliant . . . fast moving . . . should not be missed. If this does not move you to tears then nothing will.”


Sleep, Baby, Sleep has also been adapted for television in a movie starring Tracy Gold, Kyle Chandler, and Joanna Cassidy

Afflicted with Attention Deficit Disorder and endlessly inept and unreliable, Sylvie finds it almost impossible to convince people that she isn’t responsible for her child’s disappearance. Even her mother blames her, convinced she should never have had this baby.

For a preview of Sleep, Baby, Sleep, read this opening scene:

At first, for what she later estimated to the police must have been just under three minutes, Sylvie was completely calm. She’d been expecting her mother to come by, and she’d taken all the ingredients for their lunch out of the brown paper grocery bag. There were tortellini, marinara sauce, salad greens and dressing, and an Italian bread that she was going to slice up and try to make into super-buttery garlic toast like they served at Alfredo’s. Then she went in to check on the baby.

Sylvie always started to miss Cally after about an hour or so, especially when her breasts started getting heavy, which was what was happening just then. She went down the hall toward the back bedroom (and yes, the door was closed, she absolutely remembered that she turned the knob, and how it sort of stuck a little, the way it always did). She said she was halfway across the room before she realized the crib was empty. She took a couple of steps back, like she’d seen something startling inside the crib that was there now instead of Cally. Then she stood for a few seconds, just staring at the crib sheet, and she saw how the rosebuds weren’t just spattered here and there as she’d always thought, but that they were held fast in a rigid diagonal grid. Then she turned and walked all the way back to the kitchen, to the only phone in the apartment, and dialed 911.

The dispatcher specifically remarked on Sylvie’s detached tone, saying how she made herself perfectly clear – no repetitions, no vagueness, no disjointedness. He said it was like the third-party calls they got, the ones where some outside observer called in, or like the ones were somebody’s just trying to up the ante in a domestic quarrel. The police got it on tape, because every call that comes into the station is recorded. All Sylvie said was, “My baby is missing,” and then she gave her address. The only thing that seemed a little jumpy about her was that she didn’t stay on long enough to close out the call – no goodbye or the usual Please hurry. You can hear the disconnect before the dispatcher has his whole sentence out about getting someone over there.

She said it was when she finished with the telephone and then she walked into the baby’s room for the second time that she went to pieces. She walked right back to the crib and lifted up the bunched-up blanket, even though there couldn’t have been a baby (not even a baby small as Calida) underneath. She even shook the blanket, she said, though later, when she was questioned, she couldn’t say what she thought she might have gained in such a maneuver and that maybe she’d just lifted it. Next after that, she looked under the crib, and all over the floor and behind the baby’s dresser, because she thought maybe Cally had somehow rolled out of the crib and across the floor. Then she walked down the hall toward the living room because it occurred to her that maybe she’d just had a memory lapse and had put the baby down in there, in the wicker cradle, and for a second she really believed she was going to see her all curled up under the pink lacework blanket and she even started worrying about whether the police would think she was a real nut forgetting which crib she put her baby in, but Cally wasn’t in there, either and then she thought maybe Peter had come home and had her in another room, and so she started calling his name, but each time she said it, all she heard was an echo, no answer. Still she checked every room, every closet – pulling things out as she went as if it were possible the baby were stowed under towels or sweaters. She checked the crib and the cradle six or seven times more, and then decided maybe she’d actually taken Cally to the store, not left her in the house, and so she went out the door (coatless though it was unseasonably chilly day) and started off for the Grove Market, where she’d been thirty minutes earlier. She kept her eyes down toward the sidewalk as she went, looking to the left and right the way people do when they’ve lost a coin or a ring, and then once she was in the store, she went up and down the aisles, though she actually remembered what had happened perfectly well. She remembered looking in on Cally in her crib, deciding not to wake her for just a quick run to the market, and leaving her. At home. In the crib.

All the witnesses said that she was hysterical by the time she reached the Grove. “A kind of moaning and groaning mixed in with the crying,” one of them said. Tony the manager at Grove Market, said he watched through the front window when she went back out and that “she looked scared to the core.” He said it brought a lump to his throat, seeing somebody so upset.

Writing in Chocolate
A tale of mystery and chocolate, a writer's memoir about her search for secrets and stories in a small-town chocolate shop.

Sleep, Baby, Sleep
The story of a young mother searching for her kidnapped baby. “Gripping.”

Painting On Glass
An expatriate during the Vietnam War, his anguish, and the woman he leaves behind.